Today I 3D scanned a stone aged axe my Grandad found many years ago in England. I have always loved the shape and form of the tool and how it fits perfectly into the hand.

I wanted to use this form to create tools to make forms for pieces for the house.

I scanned the axe at the university and then used the files to create both silversmithing stakes and hammers. 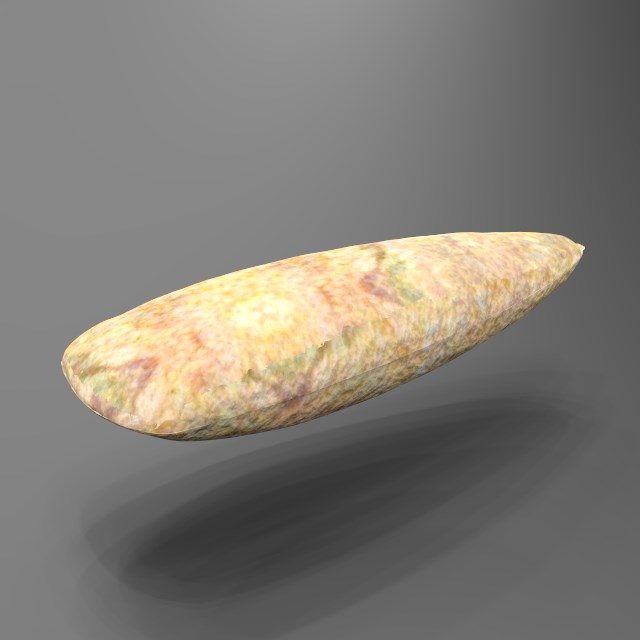 For the stakes I kept the original size of the axe and added a section that would allow it to be gripped in a vice.  For the hammers I scaled down the model to 85mm and cut out a hole for the handle.

I am planning on 3D printing the models and casting them possibly in bronze.

One of the main tools I need in my kitchen would be knives.  This is the second knife I worked on.  For this I designed the knife in CAD and 3D printed the blade in steel.  The cost of a solid knife was far too expensive to justify 3D printing, so I decided to cut out most of the weight from the middle of the knife.

I then used algorithms in grasshopper to put back in place a structure to give more strength to the piece.  Using grasshopper allowed me to play with the structure until I found an arrangement I was happy with.  This was great in this particular case as if I had drawn this in rhino alone I would have only had the option I had drawn and it would have been far more difficult to change.

The first job I had was to sharpen the blade.  I didn’t want to temper the steel so I avoided using a machine to grind the edges.  At first I used a file which took off most of the edge.  I was then given a sharpening stone from a friend which was far easier for the job and took very little time. 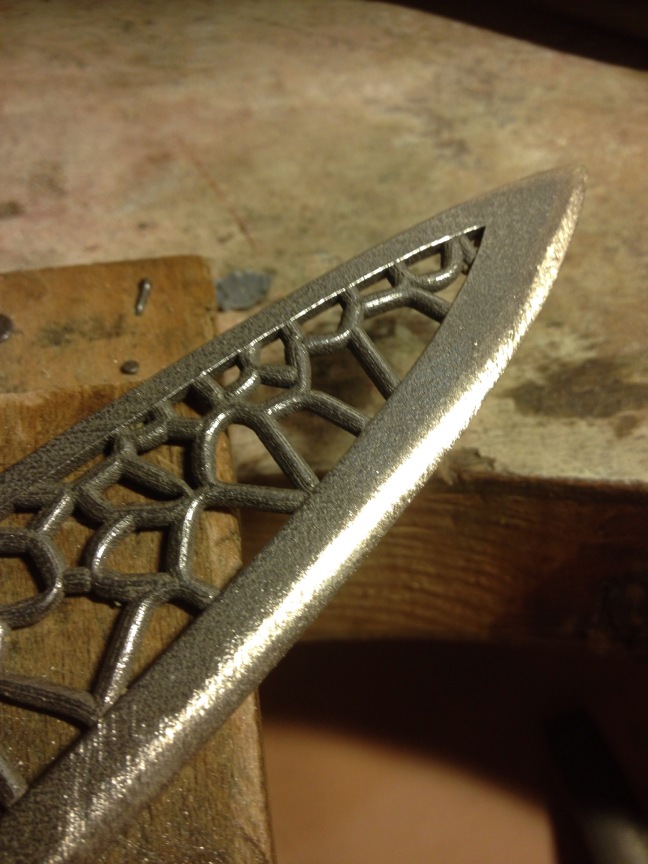 The next job I had was to make the handle.  I wanted a contrast in the piece between handmade and CAD build work as I felt this would add part of my soul into the work more with combining the handmade element.

I cut a piece of metal to act as a stopper at the end of the handle.  This slipped down to join between the handle and the blade to make the piece look a bit neater.  I then made the handle using a piece of exotic hard wood called black plamera.  I cut the wood in half and cut out the shape of the handle.  In the centre of the piece I placed some dark blue acrylic sandwiched between light gathering plastic so that when you hold it up to the light you can see through the piece. 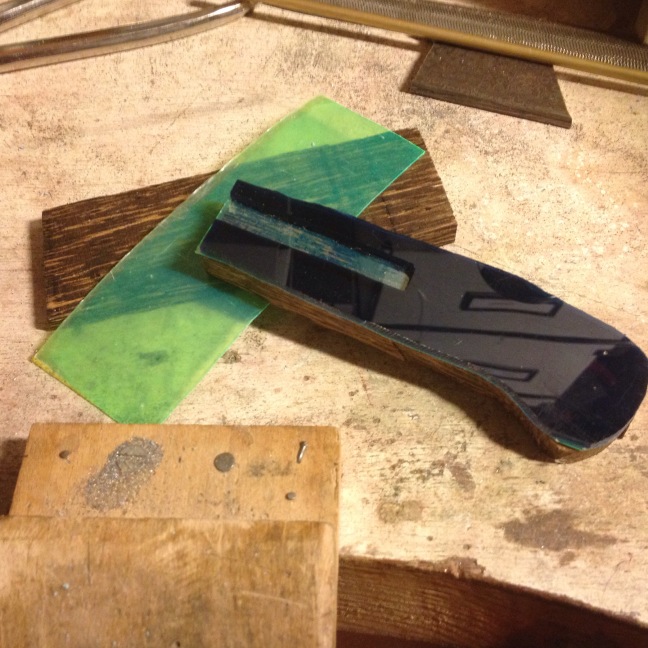 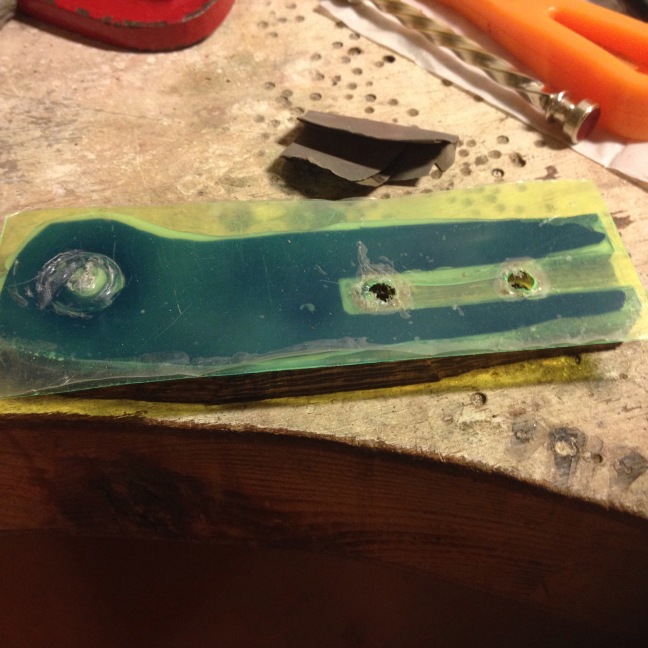 I then filed the handle into shape and sanded down to a high finish.  I used Danish oil to finish the wood to a high polish.

Over the last month or so I have been working on design algorithms using Grasshopper in Rhino 3D.  I decided to apply this fist to the stool I will need for my jewellery bench in the workshop.  The reason I chose to apply this to the stool is that I currently have a Pakistani rushty stool which is the perfect size and shape for my workbench.  So I decided to use this as the size and shape that I would use in rhino and then allow the computer algorithms to design the rest of the stool.

It has taken quite a long time and different models  perfect the final design.  I found that some of the T-splines wouldn’t Boolean union which meant I had to delete some elements.  I also had problems with some splines unioning but then the model had no volume.  To get around this I had to keep checking the volume and saving regularly to find and delete the bad splines. 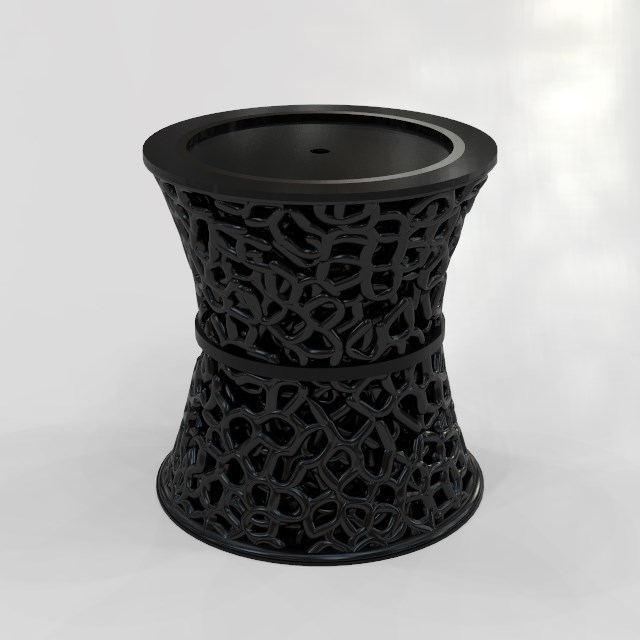 I have 3D printed a small model of the stool from my home printer.  Because the size of the university computer is about 20cm I have split the stool into eight segments that will all be printed separately.

From the model I printed I realised that the base of the model would be too thick, so to cut down on materials I have cut the larger model down to 5mm thick at the base.

The stool is now getting printed so I will be looking forwards to seeing the result. 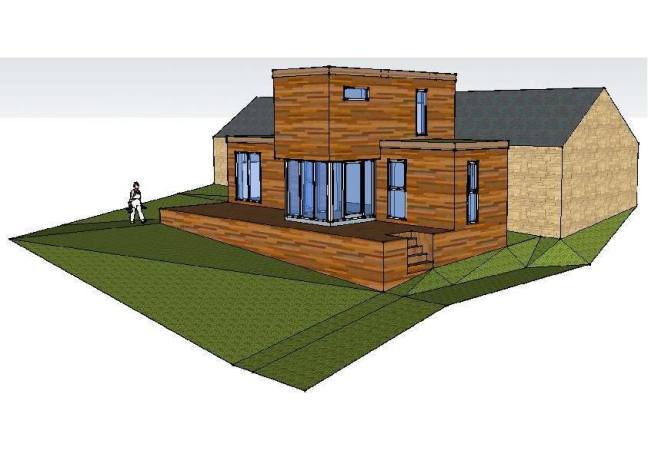 Over the last few months I have been working towards finding and securing a plot of land for my house.  I have been speaking with the Falkland Estate about the possibility of building the house on a site next to a barn on an old farm.  The plot is beautiful, it is on a slope surrounded by forest.  There is a waterfall nearby and a stunning mountain. 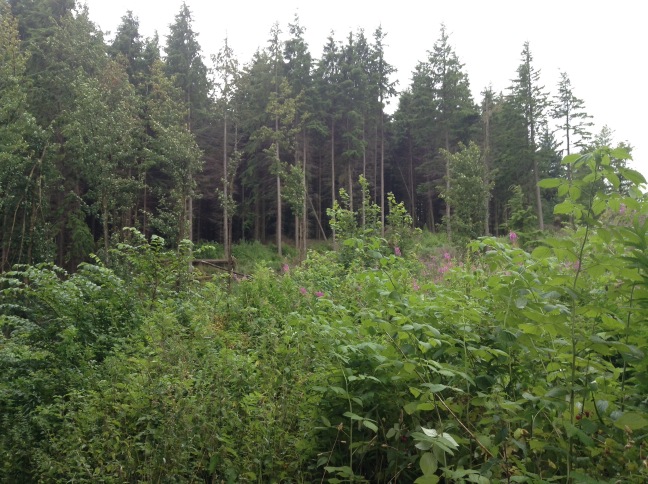 I have been playing around with designs of the shipping containers for about six months.  Last weekend my father came up to visit and he drew up the architectural plans for submission to planning permission.

I am really happy with the design.  It is exactly as I had imagined it.  My father also came up with some good ideas for the arrangement of stairs and other things that I wouldn’t have the experience to design.

The house consists of a porch area on the ground floor.  The kitchen is in the centre of the building.  To the right is a jewellery workshop separated from the house by a wall.  To the left of the kitchen is an open plan living area.

Upstairs consists of a bedroom and small shower room. Outside will also be a roof garden.

I plan to clad the building in recycled pallet crates and I hope to reclaim or recycle most of the materials for the build. I am now waiting for approval from both the Falkland estate and then planning permission from Fife Council.